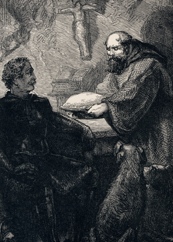 The Black Knight and Friar Tuck enjoy some delicious pie

I’m studying Ivanhoe right now, and I came across some interesting articles about the book and its connection to a real-life trial by combat… in 1817. So I thought I would blog about the details, because though I think it is really interesting it will probably never make it into my paper.

The Ashford v. Thornton case of 1817 was the last case of a trial by combat challenge in Britain. It came at a time of rising interest in medieval England, chivalry, and romance. But of course the early nineteenth century wasn’t a time when trial by combat was considered anything other than absurd and (frankly) barbaric. Most people thought the case allowed a guilty man to get away with rape and murder. How? Through his very willingness and ability to commit murder.

Ivanhoe by Sir Walter Scott was published two years later, in December of 1819. It includes a trial by combat, and several scholars have argued that the case of Ashford v. Thornton was popular enough that both Scott and his readers would have been very aware of the case during the climactic final scene of the novel. Scott indeed mentions the Thornton case in his private letters (Letters; click “Vol. IV“).

In 1817 Abraham Thornton was accused of raping and murdering 20-year-old Mary Ashford. Her body had been pulled from a pit of water outside a very small village, several miles northeast of Birmingham. At a party the previous night, Thornton had boasted that he’d already had Mary’s sister, and he would also have Mary, who was also at the party. Thornton later told police that he did have sex with Mary that night, but that it was consensual. Although we’ll never know for sure what happened, Thornton does not come across as a very sexually appealing fellow, considering his rude boasting and his appearance. The London Times noted that Thornton’s “natural thickness is greater than common, but his excessive corpulency has swollen his whole figure into a size that rather approaches to deformity.” [1]

At the initial trial, Thornton was found “not guilty” after only five minutes of jury deliberation. Again, based on the details available to us today, it is impossible to say whether he actually was guilty or innocent.

Mary’s brother, William Ashford, was allowed by English law to make an “appeal,” such that Thornton was called upon again to plead his innocence. Except this time, on the advice of his attorneys, he pleaded “Not guilty, and ready to defend the same upon my body” (qtd. in Dyer 386), at which point Thornton threw down the proverbial gauntlet (in this case a yellow leather glove). William, being a skinny teenager, did not accept the challenge. And so Thornton was free. (For what it’s worth, the weapons of the fight were to be “oak clubs.”)

The public at the time was shocked, given that it was the first demand for a trial by battle since 1638. It was an old law that had basically been forgotten about by the courts, and so it had never been repealed. For the public, Thornton had basically turned the chivalric code upside down. Chivalry asks men to use their power to defend women; Thornton used the chivalric code to get off the hook after supposedly raping and killing a woman. William Ashford, who actually was trying to defend a woman, was out of luck (being a skinny teenager, and all). 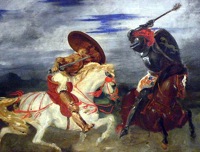 Ivanhoe‘s trial by combat surrounds  the saintly Jewess, Rebecca, who has been threatened with rape by the Templar knight Sir Brian Bois-Guilbert. Her staunch resistance to his advances causes him to fall even further in love with her. Eventually, she is accused by the Knights Templar of being a witch who has seduced Bois-Guilbert.

There are a few obvious differences between the case of Ashford v. Thornton and Ivanhoe‘s trial by combat. In Ivanhoe, the trial by combat is demanded by the threatened woman, Rebecca, not the villain (though it is Bois-Guilbert who secretly suggests it to her, because he wants to save her life). The combat also does not let someone get away with murder; technically, it saves Rebecca’s life. Indeed, the real villain, Bois-Guilbert, even though he is never on trial, ends up killed in the middle of the combat due to “the violence of his own contending passions” (490), and justice ends up actually being served. (The “contending passions” refer to Bos-Guilbert’s will to win the duel and thus further his ambitions towards eventually becoming the Templar Grand Master, and his conflicting will to save Rebecca, with whom he’s fallen in love.)

The two main scholars to take on the similarities of the Ashford vs. Thornton case and Ivanhoe are Gary Dyer and Mark Schoenfield. Both argue that Scott is attempting to rescue chivalry in some way, even if he realizes it’s not at all feasible in the modern world.

I think the idea of rescuing chivalry in a world in which it’s not feasible is a pretty important aspect of Scott’s Ivanhoe. Part of romance involves a kind of lost golden age we can never get back to, and despite the subtle critiques of chivalry and romance in Ivanhoe, I think that the world we are introduced to is indeed a romantic golden age. Although we can’t get back to that golden age, it is an important part of our history. In Schoenfield’s words, for Walter Scott, chivalric institutions (such as the trial by combat) “rendered modernity intelligible” (81).

[1] I saw part of this quotation originally in Mark Schoenfield’s article, and he cites it as 9 August 1817. But I could only find it in the 11 August paper. It is in regards to a Friday trial, which is why it appears three days after, on the Monday instead of Saturday.