On reading speed and retention

You know how in sci fi, a character gets some alien implant that dramatically increases their reading speed, and then they can blitz through a book about some subject they’ve never encountered before, and can instantly sum up the book’s argument and remember every little detail within, impressing the other characters? As a kid I always, always dreamed of doing that. Only, even if you slow things down to account for the fact that we don’t have magic alien implants (or drugs, or surgery, or whatever the conceit is), that’s not really how it works, which is a pretty big bummer. I think the idea of picking up a book and reading it straight through (in a few hours rather than a few seconds, since I’m back to talking about real life), then picking up another book and doing the same thing, and so on and so on, with full comprehension and good retention, is a myth that I’ve found hard to let go.

When I wanted to improve reading retention, I had to let go of a lot of silly ideas I had about memory. Like, I always had a sense that I wanted to memorize “just the facts,” instead of adding in extra facts/ideas/connections/mnemonics that actually, y’know, help you remember things. A recent example I used: “I can remember that Empedocles is the pre-Socratic philosopher mentioned by Plato who says everything can be broken down to four elements, because I read that poem, ‘Empedocles on Etna,’ and Empedocles disappeared or died on Etna, and “Etna” is four letters.” (I used this yesterday because I kept mixing up Empedocles with Democritus.) As a kid I had an aversion to such mnemonic devices, as if they were somehow a waste of space in my head, like my brain was a hard drive with a limited capacity, or I was Sherlock Holmes, not wanting to waste space with information about the constellations of the stars. All that meant, though, was that I was really bad at memorizing things in high school.

I finally realized this was silly. (So did Sherlock Holmes, in the later stories.) The trick is to actually consciously think about  what you have trouble remembering, and to think of a mnemonic that will actually for sure help you remember it, and to know when you’ve definitely “got it.” I use Mental Case for any cue cards I make to test myself periodically. (The app has a nice built-in schedule that corresponds pretty well to how often you need to review things in order to remember them forever. I.e., in an hour, a day, in a a few days, in two weeks, in three months, or whatever it is.) This article has a good explanation of what makes for good cue cards. The answer boils down to individual and simple and specific facts.

My reading speed also increased dramatically when, well, it had to, for my PhD comps this past year. (I assume this is part of the point of the comps.) Studying for my comps meant goal-oriented reading. With every book I picked up, I was pretty much just trying to figure out what I needed to take away from it that would help me answer these questions on these past exams, or the types of questions I might get in my oral exam.* 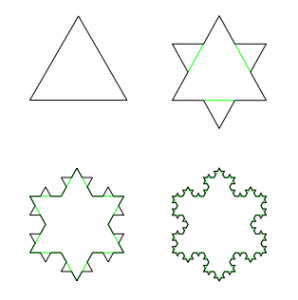 In terms of remembering the “thrust” of the argument for entire books, I now think of them in a fractal kind of way, like a Koch snowflake.** I should be able to sum up the book in one sentence; I should be able to move from there to sum up each of the main parts of the book in a sentence, then maybe the individual chapters, then sections within the chapters, then details within these sections, and then even individual quotes here and there. But in terms of memory you move from the general to the specific, you zero in on facts from vague outlines. For note-taking that means that collapsible mind maps are pretty helpful (so are other collapsible note-taking apps like workflowy), but they can be a bit slower to make, and for time reasons I didn’t end up making a lot of them for my notes. But, again, if you’re really goal-oriented in your reading, you can build a mind map of the book at its most general levels, and then fill in only the details for the parts you really need. Imagine a snowflake where only one corner has been developed into smaller and smaller fractal patterns.

At the beginning of each book I also just typed out the table of contents, and as I read I tried to “fill it out,” so to speak, not always with actual detailed notes, but in terms of turning every book into a narrative or story of sorts in my own head: “Okay, in Chapter One the author talks about this, which sets up the argument about [whatever] in Chapter Two, which is then contrasted in Chapter Three. But Chapter Three is totally a bluff because Chapter Four completely refutes everything in it.”  This information is also, of course, often explicitly given towards the latter end of introductions. The very beginnings/ends of chapters contain similar details/summaries (“In this chapter I have argued [whatever]. I will now turn to examine the effects of this argument on [blah blah blah]”). I could then visualize the table of contents as a whole, and fill in the details in my head as I thought more about the individual parts. Again, kind of like a snowflake, but there’s also the fact that narratives (i.e. stories) are much easier to remember if things lead contiguously (or metonymically) to other things.

I still do wish I was a faster reader, and I still wish I could do that “blitz through the entire book in one sitting and remember it all” thing. I also find that I sometimes misjudge how to approach a book. Sometimes I discover that I’m spending too much time on one chapter, typing out what I think are important-but-hard-to-parse quotations, trying to get the main thrust of what’s being argued, when in the end the chapter as a whole is just not actually very useful for my research. Oh well. I also still find that writing my own thoughts about a given book or subject or chapter is excellent for retention, for obvious reasons (i.e., I’m more likely to remember details when I’ve articulated why those details are important or relevant to me).

* I was also doing research for my dissertation, but that was more of a secondary “do what you can” kind of thing. Not failing my comps came first. Duh.

** Incidentally, that’s also how this guy says you can write a novel. He calls it “the snowflake method.”