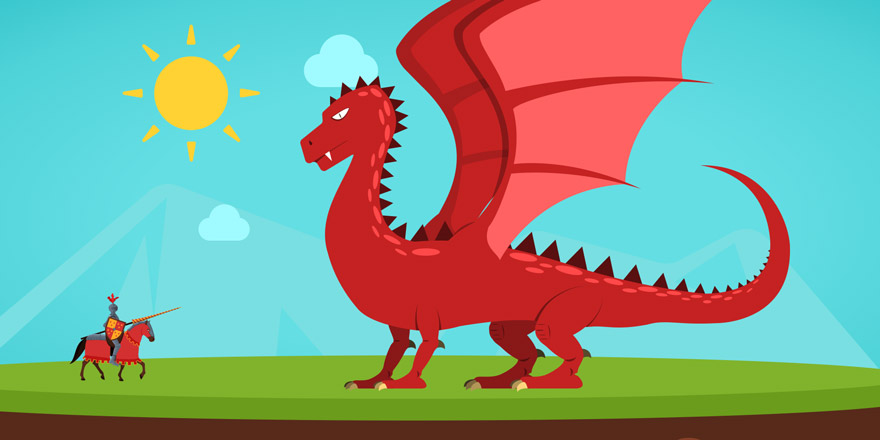 Danaerys is the villain, I mean come on everyone, that’s the whole point

Dany is the villain. That is the point of her arc.

She is turning into Mad King Aerys. We are explicitly told that when a Targaryen is born, the gods flip a coin: genius or madness. Dany’s coin is starting to land the wrong way. Like her father, who was charismatic in his youth, Dany is likeable right now, but she is slowly strarting to enjoy the fire burnin’ just a wee bit too much.

On discussion forums I’ve seen many a misognyst talk about how tired they are of seeing her “smug” face. In Episode 4 of Season 6, however, that was part of the point.

She was enjoying her self.

She was enjoying herself roasting a bunch of people alive.

We were not supposed to cheer for her. 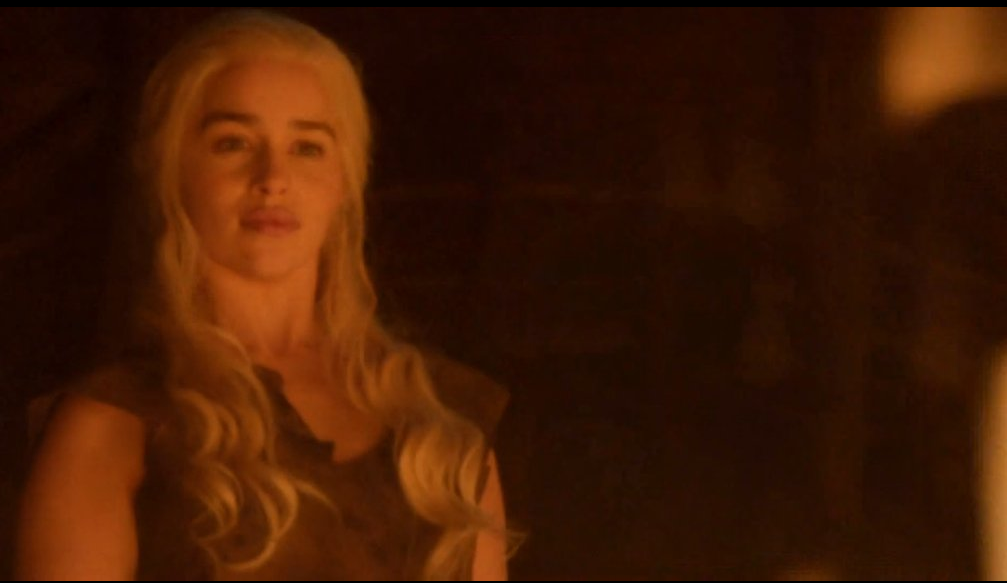 Jaime’s monologue in the bath with Brienne about Aery’s obsession with wildfire is crazy on-the-nose if you apply it to Dany. 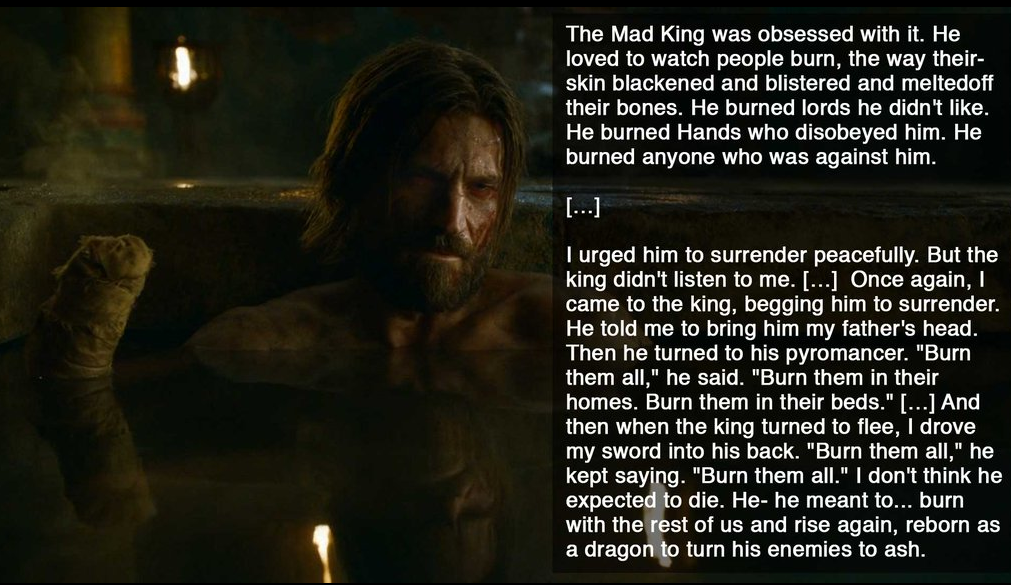 “He burned anyone who was against him.”

It’s just that we’ve been lulled into rooting for Dany, only to slowly come to grips with the fact that what she’s doing is not okay, and we’re rooting for her only because we’re reading her through standard fantasy tropes, rather than through what the text is showing us.

But let’s be real: this doesn’t justify everything she does.

Like if ol’ “Mad” King Aerys had just… not died when he tried to burn everything with wildfire, that wouldn’t make him right. It’s just that the the form of the story — that of a fantasy or romance — invites us to interpret Dany in precisely this fashion.

Sure, there’s a certain amount of awe that everyone shows her immediately after that scene, but it’s no longer a “oh this seemingly helpless girl overcame all the odds and survived fire, and now magic is real and maybe we’ll actually survive this, hurrayyyy….” like it was when her dragons were born at the end of Season 1.

It’s awe in an old Testament, fear-inspired kind of way. Even her lover, Daario, isn’t mesmerized by her in the sense of oh wow, this woman I’m with is amazing; instead, it’s a genuinely fearful kind of awe.

What we just witnessed in that scene, and immediately after, was mythic violence, in the Benjaminian sense of the word. It was the performance and display of state power that keeps the populace in check.

Also, that’s before you bring her dragons into the picture.

They’re pretty much the metaphor for state power and mythic violence par excellence: “Do what I say because I have the magic dragons.”

That’s a terrible justification, and I think both George R. R. Martin and the showrunners are aware of that.

The criticism that the Khal-burning scene in Season 6 echoes the end of Season 1 is missing the point. The point is that yeah, she’s doing it again–except, oh wait, maybe burning a bunch of people alive and taking control of an army isn’t really that great.

Maybe “miraculously surviving the flames” actually isn’t a very good justification for doing whatever you want, even though we’re trained to read fantasy and/or medieval romance texts in that manner.

A typical medieval romance, upon which 99% of fantasy is based, usually serves to entrench the aristocracy in their aristocratic positions: the rightful king is discovered and restored, everyone is happy. Heck, it even happens in Lord of the Rings. (Seriously, doesn’t that “blood of Gondor” stuff make anyone else uncomfortable?)

The books and the show subvert a lot of fantasy and medieval romance tropes because the books and the show are not A-OK with what those tropes represent. That is, fantasy and medieval romance tropes are the way they are because they are connected to the political climates which gave birth to them. This is the argument of Fredric Jameson’s The Political Unconscious. The idea of the rightful king being restored to the throne as the “solution” to the standard problems of medieval romance comes from a very specific political climate.

That’s why in the books and show, a lot of time is spent emphasising just how much the War of the Five Kings is screwing over the country side, and now there’s a bloody Marxist revolution being run by the church. Also, Dany’s entire arc in Mereen is an allegory for hundreds of years of colonialism: British, American, take your pick. It’s also a subversion of, you guessed it, more fantasy tropes (the white savior, etc.) which — yep, you guessed it again — stem from very specific political climates.

Here’s my prediction for how the rest of Dany’s arc will play out:

Instead of “stabilizing” Mereen, she’ll use her new Dothraki army, her Unsullied (whatever’s left of them, I guess?) and her dragons to burn the hell out of both Yunkai and Astapor. So instead of “getting rid of slavery yayyyyy!!” what she’ll “accomplish” before finally (finally amirite) going to Westeros will be a terrible swath of death and destruction.

“Hey Westeros I just screwed over half a continent. Now I (think) am the rightful heir to the throne, and I’ve got magic on my side (in the form of weapons of magical mass destruction). This is totally cool, right? Right? I’m justified in starting yet another war that screws over the populace? R… right?”

Readers and show watchers have been clamoring for her to “finally” get to Westeros.

Because first she needed to leave a path of death and destruction. The dragons growing up is minor. (It could have been explained with “magic” anyway.) What was more important was that we needed to see that “Fire and Blood!” isn’t a call of the people, it’s a call-to-arms given by the privileged elite, the ones with all the power and the (magic) weapons.

If you don’t believe me, juxtapose the arc I’m claiming Dany is having to the one Jaime has already had. It’s just that Dany is going in the opposite direction. Jaime started out as a child murderer and obvious villain, but the books and show refused to deny him his humanity. This isn’t extreme relativism, just an acknowledgement that human beings are human, even the shitty ones. Jaime is still a terrible person. But he’s a terrible person. It’s also similar to how the Khals were obviously terrible people who in between sessions of raping and pillaging bragged about all their raping and pillaging, and yeah they probably deserved to die far more than most people in this series (which is saying something), but still: at the end of the day, burning them alive with a look of glee on your face isn’t really the mark of a hero. Sorry. It just isn’t.

On the opposite end of the spectrum to Jaime, Dany started out as the heroine. And yes, she does have good intentions, but she’s got just a wee bit of the Targaryen craziness and a sense of aristocratic entitlement in her, from her father, Aerys.

The character I’m not sure about is Jon Snow. Like he seems like he should be… worse, somehow. Here’s what I mean:

Dany is subverting her role as a pure heroine, as I argued above. Well and good. She’s a real person, not an empty vessel of wish-fulfilment.

In the books, Tyrion has had his privilege shoved in his face, and he’s been shown to not be very perfect (e.g. Shae was handled differently). He’s mostly not a standard hero, either.

Ned was the “standard male hero” from a typical fantasy story–and it got him killed. Cool.

Bran is also doing nasty things, and is clearly not the hero. The way he takes over Hodor sometimes is NOT AT ALL OKAY. Note that I actually feel like Bran is the Northern equivalent of Dany. If she’s the human villain of fire and the Doom of Valyria in the South, Bran is the human villain of ice and the Others beyond the Wall. It’s just there’s less interesting stuff to say about him. Like he seems a bit innocent and might become a cool wizard, but then he does a thing that is obviously not okay (taking over Hodor, not to mention probably feeding on people via Bloodraven, etc.). Dany’s arc is more subtle, and more interesting.

But Jon seems to be getting away kind of unscathed, and I’m not sure why.

I have two ideas:

1. When he’s resurrected in the books he won’t be the same. The show, so far, has yet to really show the consequences of this. Maybe it’ll move towards that direction.