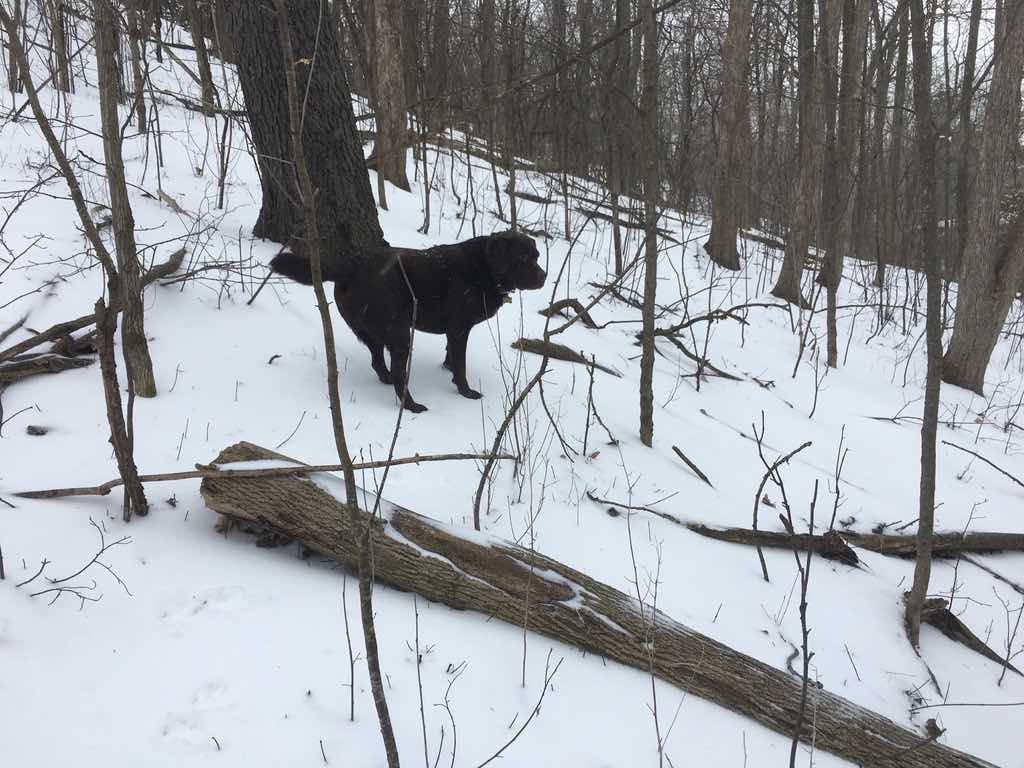 Can dogs understand metaphor? Maybe not. Maybe that kind of symbolic reasoning is beyond them. (Maybe.)

But I’d argue that dogs can absolutely understand metonymy.

To rehash the difference:

A substitution, based on some analogical link, between two otherwise disparate objects or concepts.

E.g., “That person is a machine.” (An analogical link is suggested between the steady work of a tireless machine and the hard work of a particular human being.)

A substitution, based on some contiguous link, between two associated objects or concepts.

E.g., “I need a smart person. Where can I find some good brains?” (Brains are what you use to think, and are associated with intelligence. By substituting brains for people, I’m not saying those people are “similar” to brains; I’m activating or emphasizing the importance of their brains.)

Looking at the above diagram, if I say “I need a good pair of eyes” the concept “eyes” acts as the reference point that provides access to the real target: someone who’s good at finding things, or who has good vision. Eyes are a reference point for establishing mental contact with concepts of seeing, vision, looking, and so on.

I’ll go through a few examples of metonymy that dogs understand and even actively deploy.

The quickest, easiest example of canine metonymy I can think of comes from the black lab I had as a child, Shadow.

If you told Shadow, “Hey Shadow… go get your leash,” he would go get his leash, but he would also get extremely excited (he was a lab, remember), because he knew that his leash was associated with going for a walk, and Shadow loved walks. It got to the point where it was cruel to tell him to go get his leash if you didn’t intend to take him for a walk right then and there. If we described this to visitors, we had to spell everything out (“L-E-A-S-H”), just so Shadow wouldn’t get excited and — subsequently — disappointed.

The leash was a reference point capable, in Shadow’s mind, of establishing mental contact with the target, that is, using that leash to go for a walk outside. If you wanted to tell Shadow, “Hey, we’re going to go for a walk,” you could say that, and yes he would understand you (you had to spell out W-A-L-Ks too), but you could also say, “Alright, go get your leash” as a way of communicating that it was time for a walk.

Another very simple example of canine metonymy comes from my current dog, Chaucer.

This is different from generic forms he uses of getting my attention, such as pawing at me or nudging my hand with his head to get me to pet him.

Since we don’t play bone in my office, dropping the bone at my feet doesn’t just signify any game involving the bone, as in, Let’s play with this object right here. There’s a slightly more complex chain of association. Since we always play in the living room, it’s very specific. Dropping the bone at my feet actually signals the specific game we always play out in the other room. It signals, Hey Mike, I have an amazing idea: let’s go out of this boring office and play with this bone in the living room! Wouldn’t that be fun!? If he drops the bone at my feet and I turn to pay him any attention, he immediately picks up the bone and trots off, as if to say, Let’s go!

The bone “stands for” the entire, specific game involving that bone.

I consider this example important to think about becuase it involves a dog not just understanding metonymization, but actively participating in it.

Three more good examples of a kind of canine metonymy come from canine clicker training, which I’ve gotten into with Chaucer.

In clicker training, you use a small clicker device to produce a distinctive *click!* sound to mark a behavior as “good,” or as behavior that gets a reward. You only ever produce that distinctive *click!* when you are going to give the dog a treat. This helps you be a bit more precise with what you want from the dog. For example, when you’re training “sit,” you might give the *click!* the moment the dog’s butt touches the floor, and you don’t do it beforehand. This way, the dog knows that a sit isn’t complete until they’re sitting all the way. It helps with communication. (“Oh, that’s what you were looking for all this time!” thinks the confused dog.)

There is nothing instinctive about this. It is a learned thing. In fact, when you begin with a clicker, you actually have to spend some time showing the dog that the click means a treat is coming. This is called “loading” the clicker.

Now, a *click!* sound is not a verbal word, but in this case, it is still metonymic sign. As Carita Paradis points out, “Metonymization is not restricted to linguistic communication but is also a construal in other communicative modes such as pointing and gesture” (67).

Side note: I would argue that metonymy needs a bit more than simple pointing or gestures to be considered truly “figurative.” That is, a figure doesn’t just signify; it has some degree of codification or cognitive unpacking. This is a whole other post, but this is the difference between metonymy and pure indexicality, in the Peircean sense. It’s relevant here because I think plants and trees can participate in signification — i.e. phytosemiotics — via indexicality, but you need just a bit more cognitive capacity to participate in actual figuration or metonymy.

For a dog, the *click!* helps to bridge a longer conceptual chain of real-world relationships: [behavior] leads to [click] which always leads to [reward]. Langacker talks about longer conceptual chains like this in Volume I his Cognitive Grammar book (as in [A] to [B] to [C] to… —and so on.) The *click!* is a reference point capable of establishing mental contact with the others: the good behavior that gets a reward.

We can go a step further: Chaucer gets really excited when I take out any of his of his clickers, just like Shadow did when he was told to go get his leash. For Chaucer, you can take out a clicker device and wave it in your hands, and he will know what’s coming up next. He’ll sit in front of you, anxious with excitement, waiting to be told what behaviours will earn a click and thus a reward.

The clicker, then, is a reference point for Chaucer that provides access to multiple targets: an upcoming training session, which he loves (again, he is a lab, so the difficulty is actually in keeping him calm), the chance to earn treats, and more. If I take out the clicker and wave it, he knows what’s coming up.

Speaking of visual metonymies, one of my clickers has an extra metonymic sign. Here is a special clicker we use, called a “Clik Stik”: 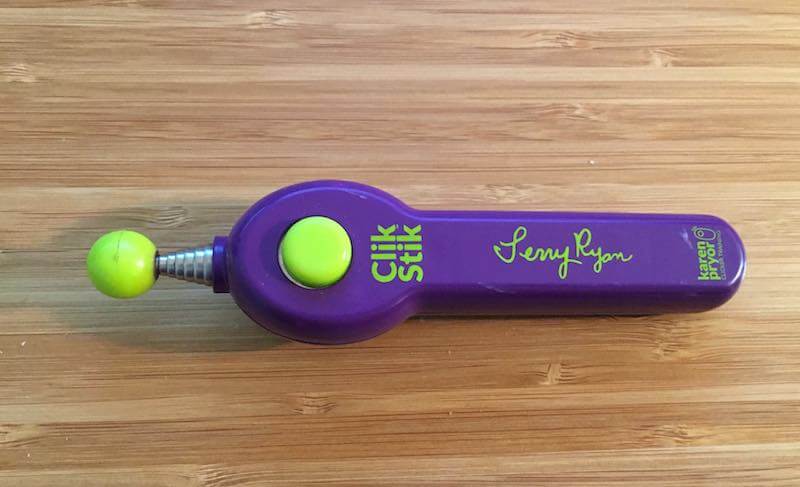 The point of the clik stik is that it extends, and the green ball at the end is a kind of indicator for where the dog should touch his nose. You can use it to do fun tricks just involving the “touch!” of the green ball, but you can also use it to lead the dog through more complex motions (Chaucer and I aren’t there yet). 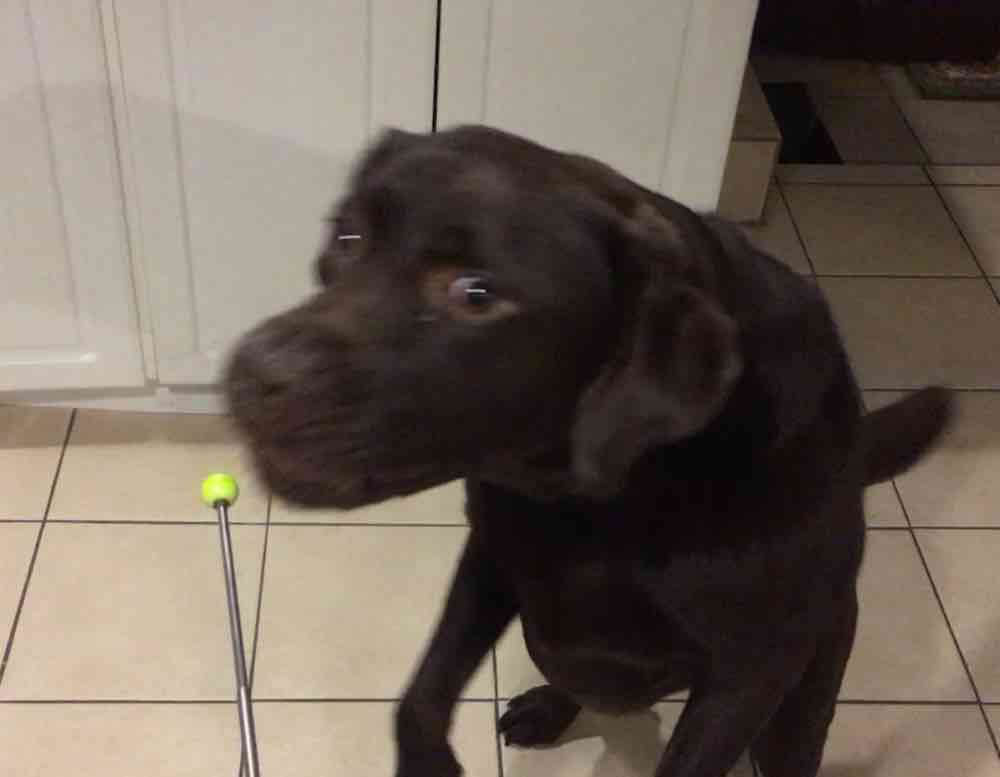 The clik stik is an obvious indexical sign, linked in space and time to the thing it signifies—for the dog, it indicates spatially and physically: “apply your nose here, touch this round dot.”

For Chaucer, who gets a bit over-eager, the clik stik is a metonym, as well, for that sort of training itself: Oh boy! Mike is going to want me to put my nose wherever he waves that stick, and it’s going to earn me treats! Like the leash for Shadow, or the bone squeaky toy, or the generic clickers we use, the metonymic substitution is that of OBJECT for BEHAVIOUR ASSOCIATED WITH THAT OBJECT.

Again, we have a more complex, almost “bundled” chain of cognitive associations:

More than this, we have a meta metonym: a metonym signifying upcoming metonyms, or an indexical sign indicating upcoming indexical signs. For Chaucer, the clik stik itself is a metonym and semiotic indicator for the kind of training that involves metonyms and indexicality, that is, touching his nose to the spot where that little round ball on the end is physically placed.

So, can dogs understand metonymy? Yes, of course.

Some Stuff I Mentioned: