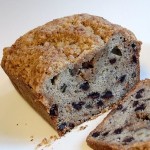 The recipe is an amalgamation of two recipes. The banana bread recipe comes from here at Recipe Zaar. It uses sour cream. I already had another banana bread recipe, but I wanted to try something new. I adapted the recipe a bit to include chocolate chips. And because there were a lot of nuts in the streusel topping I was going to add to it, I reduced the chopped nuts from 1/2 to 1/3 cup.

The streusel topping is from The Pioneer Woman Cooks! If you go to check out her recipe, you’ll see that The Pioneer Woman also knows how to take a darn good looking photo. I cut her recipe in half – and that’s what I have here – but I still found it was just a bit too much streusel, and I didn’t use all of it. However, in retrospect, when I added the streusel to the top of the bread I really could have pushed it down further into the bread mixture and thus added more, OR I could have made a centre “layer” of streusel in the middle of the bread. I regret not doing this extra layer. I have put it as an “optional” step in this recipe, but I really would recommend it. If you do add this middle layer, you may want to reduce the chocolate chips in the bread. Or use cinnamon chips. Or anything else you can think of!

I also modified the streusel recipe by replacing some of the flour with ground up walnuts, and I replaced the pecans with walnuts, just because for a banana bread I think walnuts go better than pecans. The bread was delicious. I used it to make banana bread french toast. (Which was also fantastic.)

1. Grease a large loaf pan.
2. Cream butter, sugar, eggs, and vanilla.
3. Add dry ingredients to the wet mixture, then bananas, then nuts and sour cream. Mix until well combined.
4. Add the bread dough/mixture to the loaf pan.
5. Add the streusel topping (see below). Don’t be afraid to push it down a fair bit into the bread, since the recipe here gives you plenty of streusel.
6. Bake at 350 degrees Fahrenheit for 1 hour.